Patricia Baker Tunkin has spent her life living in Kanpi and Fregon in South Australia. Her family is a well known family of Australian Indigenous Artists who have emerged from the APY region. She has been inspired to paint her works having spent time watching other members of her family as they painted the stories of their homelands since she was a teenager.

Patricia was born in Alice Springs in 1981 and grew up on country around Kanpi and Fregon learning the traditions of the Pitjantjara people of this area. Her mother (Kay Baker Tunkin) and grandfather (Jimmy Baker) ensured she learned the stories of this land as well as how to survive in this harsh environment.

While living at Fregon, Patricia was introduced to painting by her mother who was an artist at the Kaltjiti Art Centre. From this introduction in 2005, Patricia has developed her style in the years since, becoming one of the most talented emerging artists of this area.

Patricia paints stories associated with her grandfather’s dreamings, in particular Kalaya Tjukurpa (Emu Dreaming) and the important women’s creation figure of Marlilu. Her designs contain many of the caves and sacred rock holes in the region. These sites remain as important ceremony sites in the Pitjantjara lands and ceremonies are still performed here today, with the knowledge of this land handed down from one generation to the next. Fresh water, food, medicine and shelter can be found here. Bush food can be collected and hunted around the area and this forms part of the knowledge that is passed on here.

This painting depicts the ceremony sites associated with the artists country. These locations are an important source of freshwater for the people of the APY Lands. The celebration of these sites is in recognition of ancestral activities referred to as “tjukurrpa”. The series of concentric circles represent significant locations used for ceremony sites. The overlay patterns of the painting represent the physical features of the landscape. This includes the sand-hill country (tali) and the rocky outcrops (puli) creek beds and soaks as well as bush tucker that is hunted and collected whilst moving from one water source to the next. 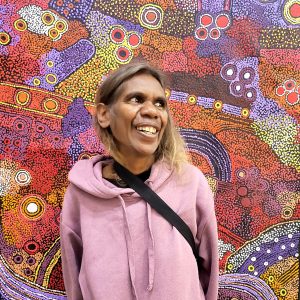 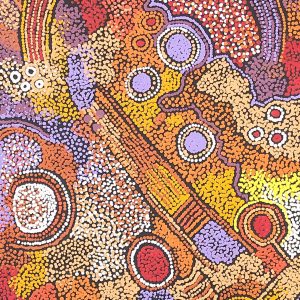 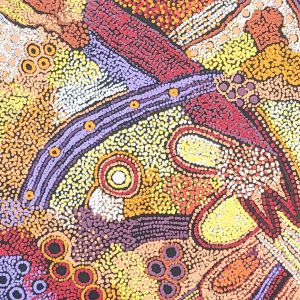 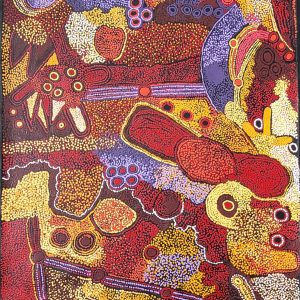