Tommy Yannima Pikarli Watson was a senior Pitjantjatara elder and Law man of Karima skin group. He was born around 1935 in Anumarapiti, 75 kilometers west of Irrunytju, also known as Wingellina, in Western Australia, near the junction of its border with the Northern Territory and South Australia. His given names of Yannima and Pikarli relate to specific sites near Anumarapiti.

Watson’s mother died during his infancy, and his father when he was about eight years old. He subsequently went to live with his father’s brother, who himself died two years later. Tommy was then adopted by Nicodemus Watson, his father’s first cousin. It was at this point that he went to live at Ernabella Mission, and adopted the surname Watson in addition to his Aboriginal birth name, thus becoming Tommy Yannima Pikarli Watson.

Nicodemus Watson became a strong father figure. Together they traveled widely, and Watson learned the traditional skills required to lead a nomadic existence in the desert, including the fashioning of tools and weapons from trees using burning coals, how and what to hunt, and how and where to find water. Under Nicodemus Watson’s guidance, Watson learned about nature and his people’s ancestral stories, collectively known to the Aboriginal peoples of Australia as Tjukurrpa

Watson’s first contact with white Australians was at the Ernabella Mission, which opened in 1940. After a short time at Ernabella, he returned to his community to be initiated. Tommy Watson’s upbringing is similar to that of many Indigenous people born around the same time, from that point forward living a traditional nomadic existence until his early teens and then working as a stockman and labourer. During his time working at Papunya he met the school teacher Geoffrey Bardon who was pivotal in supporting the developing Aboriginal Art movement.

Tommy Watson began painting in 2001, and was one of a handful of painters establishing the Irrunytju community art centre in 2001. 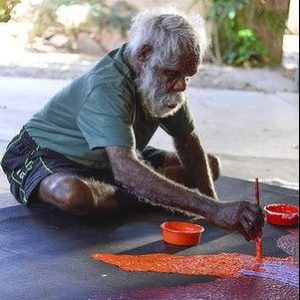