Helen McCarthy Tyalmuty (pronounced Chul-much) was born at Tennant Creek in 1972. She spent most of her childhood at Nauiyu Nambiyu Community at Daly River, about 230 km south of Darwin. Later Helen went to study teaching, completing her degree at Deakin University in 1994. During her time at university Helen’s art career began to take shape, and by 1993 she was already involved in her first art festival. Helen’s painting continued to develop after moving into teaching full time, and for ten years she successfully combined a job as a teacher in remote communities with her painting activities. Helen McCarthy Tyalmuty had her first solo exhibition in 2006. In 2007, Helen received the People’s Choice Award at the 24th Telstra Aboriginal Art Awards for her painting Tyemeny Liman’s Wutinggi (Grandpa Harry’s Canoe).
Helen McCarthy Tyalmuty says of her grandfather: “In his day he was the best canoe maker in his country. It’s a sad story and a good story at the same time. It’s the last canoe that he ever made.” Tyalmuty’s grandfather stopped making canoes when he heard that education would help his children. He left his country with a heavy heart and sent his children to school on the Cox Peninsula. Helen devotes herself to painting full time and is recognised as one of Australia’s most innovative Aboriginal artists. She spends her time in the community at Bulgul and with her family in Darwin, where she has a son and four sisters.
This piece is Helen’s artistic depiction of a Sunmat, which were made by the women and used to sit on. Sunmats, Dilly Bags and Fish Nets are made using the fibre of the leaf matter from the Pandanus plant. These plants are similar to a palm tree and have long sinuous frond that grow from them. These fronds are taken from the plant, and then stripped down to a string like fibre. These are in turn rubbed together between the hands until the fibres bind together. This is then dyed different colours using natural colourings that can be found in berries, fruits and ochre stones. Once the fibres are coloured, they are then woven into the Fish Nets. These nets are still made today after 10’s of thousands of years. 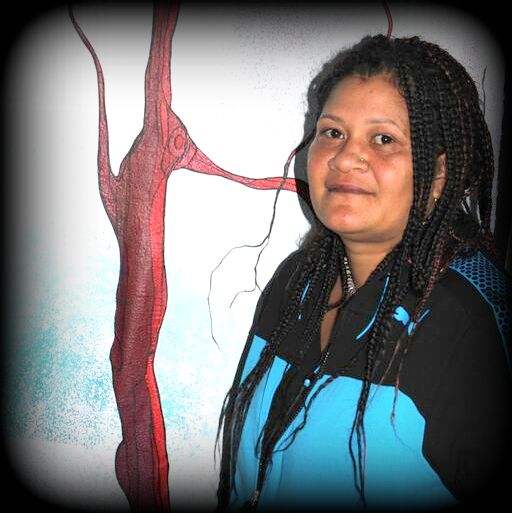