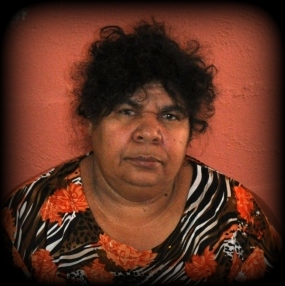 Waru Tjukurrpa (Fire Dreaming) depicts the knowledge that is used when hunting on Jorna’s mothers country, Utantj, to the south west of Central Australia near the intersection of the three state boundaries of Western Australia, Northern Territory and South Australia. Fire is used as a tool to flush out the different animals and birdlife that can be found in this area. Fires are lit depending on the direction of the wind. As the animals flee the burning grasses and bush, hunters wait for them and take the opportunity to hunt these animals, including Kangaroo, Wallaby, Emu, Snakes, Lizards and Birds. When ceremony is held in this country, plenty of meat is needed to feed everyone and the use of  burning off allows easier access for the hunters.

Jorna Newberry depicts Waru Tjukurrpa (Fire) that is used when hunting on Jorna’s mothers country, Utantj, to the south west of Central Australia