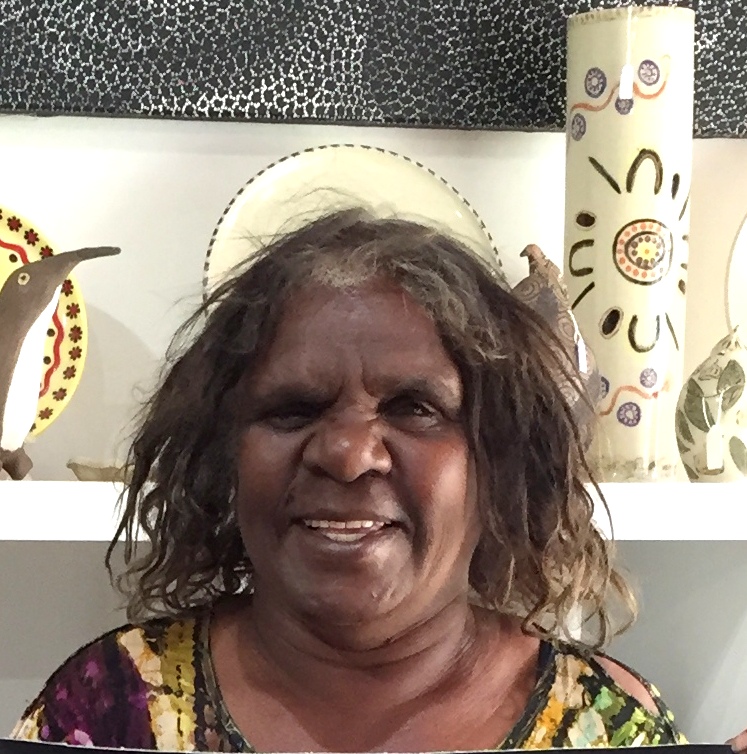 46cm x 30cm
LBR055
The country associated with this ‘ngapa Jukurrpa’ (water Dreaming) is Mikanji, a watercourse west of Yuendumu that is usually dry. There are ‘mulju’ (soakages) in this creek bed. The ‘kirda’ (owners) of this Dreaming site are Nangala/Nampijinpa women and Jangala/Jampijinpa men. Mikanji is an important water Dreaming site, and features in at least three different water Dreaming tracks.
In one story, the water Dreaming travelled from Puyurru, northwest of Yuendumu, to a ‘mulju’ (soakage) in the Mikanji creek. It unleashed a huge storm there. Two old blind women of the Nampijinpa skin group were sitting by the side of the soakages. As the two women strained their eyes to see the sky, tears formed in their eyes, creating the rain. Their spirits can still be seen at Mikanji in the form of two ‘ngapiri’ (river red gums) growing near the soakage.
A second water Dreaming track that passes through Mikanji is also owned by the Nangala/Jangala and Nampijinpa/Jampijinpa subsections, and travels further west. At Mikanji, the storm rained so hard it created a hole in the ground which became a soakage. At Mirawarri a ‘kirrkarlanji’ (brown falcon [Falco berigora]) picked up the storm and carried it on its wings to the west until it became too heavy for it. The falcon eventually dropped the storm at Pirlinyarnu (Mt. Farewell) about 165 km west of Yuendumu, where it formed an enormous ‘maluri’ (claypan). A ‘mulju’ (soakage) exists in this place today.
A third Dreaming track that passes through Mikanji is the story of the water Dreaming and ‘pamapardu Jukurrpa’ (termite Dreaming). This Dreaming travels further north. This water Dreaming is owned by Nakamarra/Napurrurla women and Jakamarra/Jupurrurla men. The termite and water Dreamings travelled together from Warntungurru in the east past Warlura (a waterhole 8 miles east of Yuendumu), Wirnpa, Kanaralji, Ngamangama, and Jukajuka. A portion of this Dreaming track also includes the ‘kurdukurdu mangkurdu Jukurrpa’ (children of the clouds Dreaming). The termite Dreaming moved on to the west to Nyirrpi, a community approximately 160 km west of Yuendumu, whereas the water Dreaming travelled on to Mikanji. A ‘kirrkarlanji’ (brown falcon) eventually picked up the water and tied it to its head using hairstring. The falcon travelled north with the water Dreaming; at Puyurru, it flew under a tree and the water fell off of its head, forming a soakage there. The Dreaming then travelled on through other locations including Yalyarilalku, Mikilyparnta, Katalpi, Lungkardajarra, Jirawarnpa, Kamira, Yurrunjuku, and Jikaya before moving on into Gurindji country to the north.